Something historic happened by the Nile earlier this month. From 4-6 November 2018, at Corinthia Hotel Khartoum by the banks of that gargantuan and historic river which traverses the African continent, stakeholders from across the continent and the world gathered to participate in the African Internet Governance Forum (AfIGF).

The setting of the AfIGF by the Nile was perhaps figurative. As a colleague mentioned to me, ‘’Oh, you attended the AfIGF by that very contentious river.” By that, he was referring to plans by several nations upstream the Nile to dam it, for purposes as varied as irrigation for agriculture to hydroelectric power and drinking water. These plans by some Nilotic countries to dam the river have been vehemently resisted by countries downstream the Nile, particularly Egypt. The reason is simple. Damming the Nile upstream means less water flowing downstream for nations whose economies rely heavily on the waters of the Nile. Putting it mildly, competition for the waters of the Nile has sowed discord amongst Nilotic nations, particularly Egypt and Ethiopia. Egyptian political leaders even debated sabotaging the Grand Ethiopian Renaissance Dam in 2013, out of fear of its negative effects on Egypt.

So when I learnt that the theme for the 2018 AfIGF was “Development of the Digital Economy and Emerging Technologies in Africa’’, I immediately sensed that something was once again brewing by the Nile. Just as this immense river snakes across huge swathes of the continent, the internet likewise connects the many nations of Africa to the world. And just as nations feel threatened by developments planned on the Nile in other territories, in recent years, internet developments in Europe and America have begun to have an effect on Africa.

At the AfIGF in Khartoum, Sudan, by the banks of the Nile, I felt as though the elephant in the room was the impact of over-the-top (OTT) service models on the future of local economies in Africa. It was right there, visible and conspicuous, but no one knew exactly how to touch it.

Someone had whispered to me a few weeks ago that a famous multinational multimedia company in her country was really struggling to cope with the internet movie content producers entering the market. She complained that this company, which pays taxes and employs thousands across the continent, might soon become extinct due to the online operation of companies who have no economic footprint on the continent.

At the AfIGF, this, I felt, was the elephant in the room. However, surrounded by armies of activists fighting for internet freedom, it was rarely touched. And yet, as indicated by the taxes implemented on some OTT services across Africa this year, this troubling trend of OTT disruption is real and will continue, fuelled by the harsh economic realities in Africa, unless the internet freedom community can support advocacy with solid economic analysis and policy alternatives to navigate this new reality.

So, back to the Nile. During lunch and networking time at the AfIGF, on the 16th floor of the Corinthia Hotel Khartoum which boasts unique views of the Nile as it snakes towards Egypt, some of the most promising internet policy leaders on the continent had a moment to reflect. And there was a lot of reflecting to be done. The challenges facing the internet today are complex, and we need out-of-the-box thinking to find policy solutions that work for all – whether “upstream’’ or “downstream”. 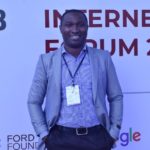 Babatunde (Tunde) Okunoye is Research Officer at Paradigm Initiative. He is in the organisation’s ICT policy advocacy and communications team which trains and campaigns against digital rights violations in Africa. He is also a member of the organizing team of the organisation’s Digital Rights and Inclusion Forum (formerly Internet Freedom Forum). Tunde also moderates the NetRights Coalition, an important mailing group and coalition for digital policy in Africa.  In his spare time Tunde loves reading and travelling.